Exposing links between local politicians and paramilitary death-squads normally doesn’t sound like grounds for arrest, but in Colombia it can be. 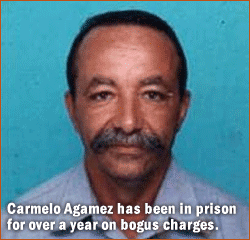 Colombian activist Carmelo Agamez has been in prison for over a year on bogus charges. Both the Colombian Attorney General and a court have found that his rights were violated—but the prosecution just won’t stop. The LA Times even wrote a feature article describing his unjust detention. Agamez and other activists are being targeted with trumped-up charges designed to stigmatize and silence human rights defenders.

Meanwhile, the U.S. government gave approximately $40 million in human rights and rule of law aid to Colombia last year which came with conditions that the Colombian government respect the rights of human rights defenders. Congress set those conditions last December after years of advocacy by Human Rights First and other groups.

Just last week I was in D.C. with Agamez’s daughter, Sandra Agamez. We urged U.S. officials to encourage the Colombian government to stop this unjust practice. Human Rights First is also running a petition to the State Department urging it to enforce U.S. conditions on aid—and protect human rights activists unjustly detained.

This video explains the plight of Agamez and many of his colleagues fighting for human rights, finding persecution:

Last year I went to Colombia and visited activists like Agamez who were stuck in jail, as well as others who were suffering harassment and baseless prosecutions. Human Rights First issued a report, Baseless Prosecutions of Human Rights Defenders in Colombia: In the Dock and Under the Gun, detailing the abuses.

We have since relentlessly advocated for change—and have seen progress: conditioning U.S. aid to Colombia on its human rights record was a step forward, as were Congressional hearings on this topic last year. The Colombian government has also released dozens of activists who can now continue their work.

But there are still victims like Agamez who suffer persecution who need our help. The Colombian government should empower a prosecutorial unit to review all criminal investigations of human rights activists to promptly close bogus cases and deter new cases of arbitrary detention. Activists courageously fighting for human rights struggles need to be guaranteed their basic rights.