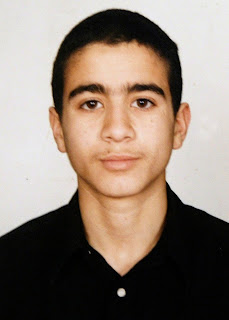 This week, Omar Khadr, the 15-year-old Canadian arrested by US forces in Afghanistan eight years ago, will finally face a trial. Or not. Although the defense department’s Office of Military Commissions sent out notices weeks ago saying Khadr’s trial starts this week, the military’s more recent notices to observers suggest that this week we won’t actually see Khadr’s trial – we’ll be watching a pre-trial evidentiary hearing instead. That’s typical of the military commissions, a quasi-court system set up in Guantanamo Bay to try detainees in the war on terror – what the Obama administration calls “unlawful enemy belligerents.” (President Bush called them “enemy combatants.”) Regular observers of the military commissions are used to the confusion, misinformation and delay. After all, the military doesn’t post the schedules or documents filed in military commission cases on its web site or any other publicly accessible place, the way the government does for regular federal court trials. But if it’s annoying to observers, for the detainees themselves, who have been imprisoned at the military installation for up to eight years without a trial, the confusing stop-and-start nature of the proceedings have much more serious consequences. Omar Khadr, for example, has been imprisoned without trial for more than one third of his 23 years. His trial, when and if it goes forward, will be the first military commission trial to be held under the Obama administration. Accused of throwing a grenade that killed a U.S. soldier in Afghanistan in July 2002, Khadr — a Canadian citizen whose family moved to Afghanistan in 1996 — claims he is innocent. And there appears to be strong evidence to support that. According to a report in the Toronto Star, classified documents in the case indicate that “Khadr was buried face down under rubble, blinded by shrapnel and crippled, at the time the Pentagon alleges that he threw a grenade that fatally wounded a U.S. soldier.” Khadr was captured after a gunfight between U.S. forces and al Qaeda fighters. By the time he landed in US custody, he’d been shot twice in the back and once in the shoulder, struck with shrapnel in his right eye and wounded in his left leg. When Khadr regained consciousness a week later, U.S. forces brutally interrogated him in the tent hospital at Bagram, he says, shackling him into painful positions and denying him pain medication despite his serious wounds. Even before he’d healed, he was forced into stress positions with his wrists shackled to the ceiling, made to carry heavy buckets of water and clean floors on his hands and knees, and threatened with barking dogs while a bag was tied over his head, according to documents filed by his defense lawyers. Not allowed to use the bathroom during interrogations, Khadr was forced to urinate on himself, he says. When he was transferred to Guantanamo Bay three months later, the abusive interrogations continued. Khadr says he was beaten, sleep-deprived, and threatened with torture and rape. That treatment is likely to be the focus of hearings scheduled in Khadr’s case this week. Khadr’ s lawyers claim that his statements in custody should not be used against him at trial because they were the products of torture. The Military Commissions Act of 2009 prohibits the use of coerced statements except under very narrow circumstances that don’t apply to Khadr’s case. In another case also involving tortured confessions from an adolescent, a military commission judge ruled that the statements of Mohamed Jawad, an Afghan whose family says he was 12 when arrested, could not be used against him because they’d been coerced by interrogators who’d threatened to kill him and his family. The government eventually dropped the case. Khadr’s lawyer are hoping their client will get similar treatment. But even if the case proceeds, it has many other problems. For one thing, Khadr was only 15 when he was captured, and it’s not clear that military commissions have jurisdiction over juveniles. No military commission has tried a child soldier since Nuremberg. Military court-martials don’t try children, and a U.N. treaty on the rights of children in armed conflict ratified by the United States a month before Khadr was detained requires that child soldiers be treated as victims entitled to rehabilitation rather than as combatants to be punished. The Military Commissions Act, for its part, says nothing about jurisdiction over juveniles. And the commissions have no codified procedures or rules. Equally fundamental is that the military commissions were created to try war crimes. But even if Khadr were guilty of the acts charged – murder, attempted murder, conspiracy, and aiding the enemy – those aren’t really war crimes. At least, they weren’t war crimes until Congress declared them to be in the Military Commissions Act of 2006 — four years after Khadr allegedly committed them. So to try Khadr for war crimes now is a violation of the Ex Post Facto clause of the U.S. Constitution, Khadr’s lawyers point out. (Khadr could, of course, be tried in a civilian court for the crimes of murder and conspiracy.) Khadr’s case, then, underscores many of the fundamental problems with the military commission system – that it has no rules, little experience, almost no precedent and barely any law to guide it. So why did the Obama administration decide to make the case of Omar Khadr its first trial in a military commission? If the administration is hoping to showcase the strength of its military and the president’s tough stance on terrorism, this probably wasn’t the best way to do it.