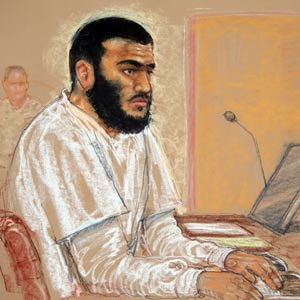 Cross-posted at The Huffington Post. Photo Canadian Press. The rulebook for the Military Commissions were just issued last night, after months of commission proceedings without them. Since neither the judge nor the lawyers had had a chance to read them yet by this morning, today’s hearing on the motion to suppress statements extracted by torture and abuse, originally scheduled for this morning, has been postponed until 1:30.

We just heard that the new rules are posted on the Office of Military Commissions website, here. Still, we have not been able to get copies of the motions being argued today. As I described before, the motions are supposedly asking to suppress statements made by Khadr during his 100 or more interrogations by U.S. officials in prisons at Bagram and Guantanamo Bay, many of which he claims were extracted by torture. I say “supposedly” because the latest motions we’ve been able to see are from 2008. The new ones haven’t been made publicly available. HRF, Human Rights Watch, the ACLU and Amnesty International – all of whom have representatives here to observe the court proceedings – just sent a letter to the Convening Authority for the military commissions asking for copies of those. I also just ran into Brigadier General Stephen Xenakis, who in addition to being a retired military general is a psychiatrist who’s examined Khadr – arrested at age 15 and imprisoned at Guantanamo Bay for eight years now. He hopes to testify for the defense about the voluntariness (or lack thereof) of Khadr’s statements made under abusive and coercive conditions, based on his examinations of Khadr. Although he’s flown to Guantanamo Bay in the hopes of doing that, he still hasn’t received clearance from the military commissions to testify at these proceedings. Such is the state of the U.S. military commissions, eight years after their creation, that the judges and lawyers just got to see the rulebook and the witnesses have to fly all the way down to Guantanamo Bay without even knowing whether they’ll be allowed to testify. I’ll report back after this afternoon’s hearing – if it happens. Update: Since our request, the Office of Military Commissions has informed us that the military commissions judge in the case of Omar Khadr has approved the public release of a Motion to Suppress pending in this case and that it is on the OMC website. It is available here.