The Monster & The Constitution 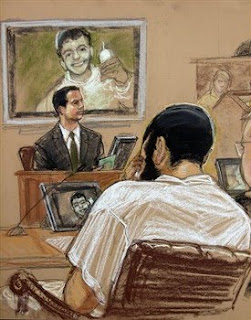 I had heard the reports before about torture and abuse of those captured by Americans after 9/11, but I had never heard it directly as I did today. I am attending a preliminary hearing for Omar Khadr who has been accused of killing an American soldier during a firefight in Khost, Afghanistan in the summer of 2002.

Some may question whether the tactics are torture. We know the past euphemisms of “enhanced interrogation techniques.” In court, the government is using the term “nontraditional interrogation.” Whatever the term, you decide.

Damien Corsetti testified that there was “always at least one person in air lock with their hands handcuffed above their head with a hood on and shackles on their feet.” He said the purpose was to inflict pain.

Mr. Corsetti testified that an interrogation technique used at Bagram, Afghanistan was the “fear of rape.” He explained that the rules did not allow interrogators to “directly threaten” a prisoner, but to “plant the seed” of fear in the minds of the detainees.

Defense counsel asked Mr. Corsetti whether he had ever heard detainees screaming in pain. He said, “continually.” The screams of pain were heard by the other prisoners, if they had any doubt that their turn might be next.

Mr. Corsetti had very little training on how to conduct lawful interrogations. He had been in tactical operations, but was retrained two weeks before deployment to Afghanistan as an interrogator. He was given another week to observe actual interrogations when he arrived at Bagram, and then he was set loose. He explained that the “only clear rule” for interrogators was “not to strike the prisoner.” The pressure to produce was enormous. He stated that interrogators had to produce 20-40 interrogation reports every week or headquarters would call. Corsetti’s nickname was “The Monster.”

Mr. Khadr claims that he was tortured and that any incriminating statements produced through coercive interrogation should be thrown out. The government claims that Mr. Khadr was treated well and faced no abusive interrogations. Mr. Corsetti shed no light on these allegations as he was not one of the persons who interrogated Mr. Khadr. Mr. Corsetti, though, paints a grim picture of what life was like for many prisoners at Bagram, and it raises doubt about the pattern and practice of interrogation at the facility.

Pivot now to Mr. Khadr. Mr. Corsetti saw the defendant as he arrived at the hospital severely wounded from the firefight with American troops. He said Mr. Khadr “seemed like a typical fifteen year-old child.” Except for the life threatening wounds.

The troops nicknamed Mr. Khadr “Buckshot Bob” because his face was peppered with shrapnel. Mr. Corsetti described a wound on Mr. Khadr’s back as large enough to stick a can of Copenhagen chewing tobacco inside. An opthamologist testified that the cornea in his left eye was shredded and that there were additional shrapnel wounds in both eyes. Mr. Khadr is blind in his left eye. Despite the grievous injuries and multiple surgeries, Mr. Khadr was discharged from the military hospital to the detention center in about fifteen days.

It is not clear at this stage whether the child soldier is guilty of the charges against him or innocent, or whether he was tortured or not. It is clear, though, from the photos at Abu Ghraib in Iraq to the testimony here at Guantanamo, that the environment during our wars in Iraq and Afghanistan was ripe for abusive interrogations: from the lack of training and skilled technicians to the techniques of water boarding approved at the highest levels of our government.

Terrorists want us to fear. They want us to be so afraid that we will abandon reason, violate our laws and Constitution, and disregard our institutions and values. We saw the fearmongering again yesterday in Congress as Members are arguing in the aftermath of the attempted bombing at Times Square that we should strip Americans accused of terrorism of their citizenship and their rights. We should presume guilt before innocence, militarize investigations and abandon our effective federal courts.

On the contrary, this is what terrorists are hoping for—that we will stoop to their level. But if we abandon our own laws and values, then we become no better than them, and they have won a significant part of their battle. By abandoning our own rule of law we lose the support of our own citizens and allies, and at the same time support al Qaeda’s most powerful recruitment strategy.

No nation has ever defeated terrorism by embracing its tactics.