Push Back on Koran-Burning Day 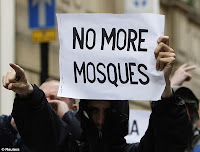 The religion “of the Devil” … practiced by “animals of Allah” … worshipping a “monkey-god”…Messages of hatred and discrimination are polluting our public discourse as we approach the anniversary of 9/11.

This Muslim-bashing follows on the heels of a debate about the “Ground Zero Mosque.” Comments from fearmongers have been deeply discriminatory—and completely disregard what’s really at stake: our Constitutional values, fundamental rights, and national security.

Cynically using the 9/11 anniversary to vilify Islam and Muslims trivializes the real tragedy of 9/11—the indiscriminate killing of innocent civilians.

We’ve gotten to the point that a small group in Florida is supporting a “Burn a Koran” event on September 11th—sponsored by a church, of all places. Left unchallenged, their message of hatred is heard loud and clear across the globe.

Where is the sense in this situation?

The Dove World Outreach Center in Gainesville Florida has posted on its website “10 Reasons to Burn a Koran.” We’re making our own list, and asking our supporters to send us your top reason NOT to burn a Koran. We’ll select the top 10 answers, post them on our website, and distribute them near and far to make sure another perspective is heard in this debate.

This misguided and violent rhetoric only harms us by alienating the communities whose cooperation is essential to effectively combat terrorism.

Human Rights First has been fighting discrimination and intolerance wherever it occurs, monitoring situations all over the world where bias turns into violence and finding ways to combat it. Help us push back on those who are delivering messages of hate.