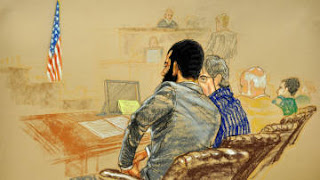 Guantanamo Bay, Cuba Cross-posted at The Huffington Post On Thursday afternoon, I watched Omar Khadr’s sole defense lawyer, Lt. Col. Jon Jackson, collapse in the Guantanamo Bay courtroom while cross-examining a key government witness. He was taken away on a stretcher by ambulance and hooked up to an I.V. Fortunately, Jackson, who is only 39 years old, at that point was breathing normally. As an observer in the courtroom, however, I was stunned. It all happened so suddenly and he seemed to be in perfect health and in complete control of his questioning. I learned Friday morning that the trial will be suspended for at least 30 days. The trial of Omar Khadr is the first one before a military commission under the Obama administration, and the first alleged child soldier to be tried by a Western country since World War II. This is also the first time that an enemy is being tried as a war criminal for allegedly killing a U.S. soldier during a firefight. That’s normally not considered a war crime, although the United States, in the Military Commissions Act of 2009, declared it one if the US soldier was killed by someone not in uniform – known as an unprivileged enemy belligerent. Such individuals are also normally called civilians. The irony of the U.S. charging with murder a 15-year-old civilian who was shot twice in the back, blinded and peppered with shrapnel by US forces during a four-hour shootout and aerial bombardment is becoming increasingly clear as the government begins to present its case. Although the lead prosecutor, Justice Department lawyer and former Marine Jeffrey Groharing, argued in his opening statement this morning that Omar Khadr is a terrorist and a murderer who violated the laws of war, the evidence presented so far suggests that he was a kid forced by his father to help his father’s al Qaeda friends when he was barely an adolescent. Raised in Canada until the age of nine, he was dragged to Afghanistan and stuck with those al Qaeda friends in the compound when U.S. forces decided to storm it. There’s been no indication whatsoever that Khadr had any choice in the matter: not over where he was, what he was doing or with whom he was associated. The difficulty of proving a murder in active combat is also becoming increasingly clear. Repeatedly, the government’s two lead witnesses today testified about the difficulty of knowing or even seeing what exactly was going on in the firefight that took place at a compound near Khost, Afghanistan on July 27, 2002 – the firefight that led to the death of the U.S. soldier who Khadr is accused of killing. In his initial report that night, the Special Forces Commander in charge of the raid, identified at trial as Colonel W., said the enemy who’d thrown the grenade had been killed in combat. In the same report, he wrote that there had been three combatants killed, and one wounded in action. Khadr was the only person who got out of that firefight alive. Col. W did not explain that contradiction in his testimony today. Testimony from Col. W and another witness, Sargeant Major D, also at the firefight, attempted to establish that the grenade had come from an alley where Khadr was later found. But Khadr was not the only person in that alley. An older man, found with an AK-47 and another grenade, was found in the same alley. And, Col. W testified, when soldiers returned to the scene of the crime later, they learned that villagers had found five more bodies in the rubble, dragged them away and buried them. Those bodies were never found. When asked by Khadr’s lawyer why he didn’t carefully secure the compound after the firefight, collect evidence and treat the site as one would the scene of a crime, Col. W., a reservist who’s also been a police chief for the past 30 years, said that wasn’t what he was there to do. He wasn’t acting as a policeman; he was fighting a war. “No one at that time ever believed we’d be in a court in a trial like this over a terrorist,” he said.

Of course they didn’t. Because it’s unprecedented to turn the ordinary actions of an enemy fighting U.S. forces into a war crime. It’s what happens in war. And it’s likely going to be impossible for the government to prove who did what in that particular fight, eight years later. To hold a young teenager responsible for the actions his father ordered him to do seems even more bizarre. In a video the government played today in court, a young Omar Khadr, looking pre-pubescent without any facial hair, is seen laughing and sitting among two adult men, who appear to be making explosives. Omar Khadr may have been helping them, though his role is unclear from the video. But is the child in the video really the face that President Obama wants to present as the first war criminal he tries in his “war on terror”? After the first day of testimony for the government, I’m left wondering who really is the criminal here. Sargeant Major D described how he entered the compound, armed with an N-4 and a Glock-9mm. The compound had just been shot up by U.S. Apache helicopters and bombarded by two 500-pound bombs. After sensing a grenade and small arms fire coming from an alleyway, Major D ran to the alley and shot a man in the head; the man was armed with an AK-47 and a grenade. Omar Khadr, however, was seated on the ground, unarmed, in a dust-covered light-blue tunic, his back to the Major D. Khadr was not holding or aiming a gun at the Sargeant, or threatening him in any way. Yet Sargeant Major D shot him twice in the back. He then walked over and thumped him in the eye, to see if he was still alive. Surprisingly, he was. Lt. Col. Jackson, Khadr’s defense lawyer, asked Sarg. Major D if he knows the laws of war, which prohibit killing a civilian not actively participating in hostilities. Jackson also pointed out that there was an armed civilian CIA agent accompanying the US forces that day. Which got me thinking: who is the real war criminal here? And who gets to decide? Lt. Col. Jackson is doing an excellent job of posing those questions to the jury of seven military commission members, chosen yesterday. Let’s hope he recovers quickly and can resume his role at trial tomorrow. Update: On Thursday evening, the Military Commission Defense office reported that Jackson, who had gallblatter surgery six weeks ago, passed a gall stone in court today. He is in the Guantanamo Bay hospital, where he is receiving morphine to kill the pain. Doctors will decide by Friday when he’ll be able to resume handling Khadr’s defense. Because he is Khadr’s only lawyer, however, the trial cannot go on without him. Update II: An official from the Office of Military Commission Defense told reporters this morning that the trial of Omar Khadr has been suspended for at least 30 days. Lt. Col. Jon Jackson, Khadr’s lawyer, will be evacuated from Guantanamo Bay and taken to a hospital in the United States. The judge did not call the court back into session, however, and has not announced any of these developments on the record.